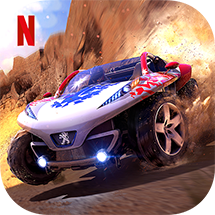 Charge through canyons, drift across dunes and rocket past your opponents in this extreme off-road racing experience. Forget everything you know about racing — all you need are your instincts and a fearless desire for speed.

This game doesn't use cloud saves. If you uninstall the game or play on a different device you'll start from the beginning.

Content rating: See the game in the Google Play Store or the App Store

To play Netflix Games, you’ll have to install them on your device first. You need:

From the Netflix app

The Netflix app includes a Netflix Games row on the home screen and a Games tab at the bottom.

From the Play Store

You can also search for a game in the Google Play Store.

Netflix games aren't available in Kids profiles. A game may not appear for a profile if the profile’s maturity setting is set below the maturity rating of the game, or if your device isn't compatible with the game.

From the Netflix app

The Netflix app includes a Netflix Games row on the home screen.

From the App Store

You can also search for a game in the App Store.

Netflix games aren't available in Kids profiles. A game may not appear for a profile if the profile’s maturity setting is set below the maturity rating of the game, or if your device isn't compatible with the game.

Stuck in the game somewhere? Wondering how something works? Have questions about in-game settings? Here are answers to common gameplay questions.

Customizing Controls
From the main menu, tap the Options

> Controls and choose between the different control options. During a race, in the upper left corner tap pause

Changing Language or Country
The game language will match your Netflix profile language automatically. You can also choose the language inside the game. Tap Options

> Language And Country and choose a language and country.

Changing the Country is permanent. You won't be able to change it again.

> Sound & Display. Use the sliders to adjust the volume levels.

> Sound & Display. In the lower part of the screen, you'll find the Speed Unit settings.

Career
Race to earn Stars, Credits, Crowns, and Cards. Play events categorized by season to advance in this mode. Some events require that you own a specific vehicle or have a specific vehicle Rank, so you’ll need to upgrade your vehicles first.

Mastery
Master the vehicles you have unlocked by completing special challenges which can grant special rewards, such as exclusive Decals. Vehicle Masteries for each vehicle will be unlocked when you build them with Blueprints.

Daily wins grant you rewards when you compete in multiplayer and finish several races in one of the top 3 positions. Rewards are better with the more wins you accumulate, and reset daily.

Limited-Time Events
These sets of races are only available for a certain time. Tap the Claim Your Rewards banner to collect your items.

Launch Event
Use Fuses to participate. Fuses refill once empty to a maximum of three. Finish all three stages to unlock the exclusive car. If you couldn't finish the event in time, you'll need to get the car another way, but the upgrades stay regardless.

Credits
Used to buy many different types of items. Earn by racing in Career mode, Vehicle Masteries, and Multiplayer. The number won depends on your position, the number of Stars earned in Career mode, or your performance during the race (represented by medals).

Stars
Used to measure your progress throughout Career mode. There are 225 events with 3 Stars to gain in each. Depending on the game mode, the first Star always won by position/time/score in a Career event. The others are won by completing 2 objectives per event. These objectives are described in the pre-race screen.

Cards
Get this item by earning them from Boxes, participating in Limited-Time Events, and earning Stars in Career mode. They are granted by lottery, so each one will be random. Cards can't be sold.

Black Market
The shop refreshes every 6 hours with a selection of cards you can buy with Credits or Crowns.

Unlocking and upgrading
Collect the number of Blueprints needed to unlock a vehicle. Get Blueprints by opening the Boxes you collect as rewards or buy from the Black Market. To upgrade your vehicle, you'll need enough Blueprints, Tool Cards, and Credits. Once a vehicle is unlocked it can't be sold.

Vehicle Rank
An indicator of power, and is tied to the acceleration, top speed, handling, and Nitro of the vehicle. Improve your vehicle Rank with Rank-Up Tools found inside Boxes to advance. You can increase a vehicle's Rank (up to level 50) by upgrading it in the garage menu, or by unlocking a vehicle with a higher Rank.

Customization options for a vehicle
Customize your vehicles with Decals - tap on the vehicle, then tap on the sprayer in the lower left corner. You can win Decals in exclusive Limited-Time Events and vehicle Mastery races, or buy them with Crowns. The vehicle window tint cannot be adjusted.

Checking goals and objectives
In Career mode, objectives are explained in the pre-race screen. Tap on any poster to get extra info about the race, the type of challenge, and the second and third-Star objectives. Once a race and the vehicle are chosen, you'll see the objectives again on the loading screen.

Nitro
Nitro are boosts found during a race by collecting nitro bottles, or by performing tricks in-game such as flat spins and barrel rolls, drifts, jumps, knockdowns, and destroying breakables. Collect these while racing to fill your Nitro bar and unleash it by tapping the screen. Tap once to consume a portion of Nitro, or tap multiple times to boost more and make it stronger.

Long Nitro
Activate Long Nitro by tapping once to make a red section appear on the end of the activated Nitro chunk. Tap the Nitro again once the Nitro bar reaches the red, and your next chunk will be consumed more slowly. Using Archetypes such as SUVs or trucks will make it easier for you to perform long chains.

Drifting
Steer long enough to start drifting. You can also tap the brake while steering to force it earlier. Use drifts to navigate dangerous curves. Stop a drift by steering the vehicle straight. A quick Nitro boost will also pull you out of the draft and around particularly sharp turns.

Barrel Rolls and Flat Spins
These tricks reward Nitro during a race. Skilled players can perform several rolls or spins in a single jump - a solid strategy to quickly fill your vehicle's Nitro bar.

Boosters
These are bonuses that affect all the races a player starts for a time duration. Buy them with Credits before the start of every race, or get them as gifts or rewards. When activated, a timer appears on the Boosters screen. Activating more than one of the same type will add to the existing time limit.

Shortcuts
There are special paths on the tracks that can only be broken open by heavy vehicles like Monster Trucks and Trucks. Skilled players can sneak onto shortcuts if a heavy vehicle clears the entrance first.

Racing on different tracks with vehicles of different tiers
You have to unlock events to race on the different tracks. You can race in all unlocked events using any vehicle you may already have, although you can check the event information to get a hint about which Archetype will perform better in that specific event.

Changing camera view
While racing, tap the small camera in the upper right corner of the screen. You can also change it by tapping pause

Change the radio station
While racing, in the upper left corner tap pause

If you're having issues while playing a game like lag, freezing, pausing, slow frame rate, black screen, or crashing, try each of the following steps separately and see if it helps.

If none of these fix the issue or you keep having to repeat them, please contact us. Let us know which game you're playing and what the issue is.

Not finding what you're looking for? Check our Netflix Games article. You can also always contact us.